Resurrection is for Life, not just for Easter

I remember a while ago hearing about the Death Cafe movement. Turns out it’s going from strength to strength. Although Western culture often pushes the reality of our mortality under the carpet, many seem grateful for this chance to finally face up to it.

And yet, in the commentary I’ve read about the initiative, all the conversations about death seem to focus on details of funeral services, cremation or burial, types of care for the dying, etc.

Of course, that all has a place. But what about discussing whether there’s anything beyond death? Now maybe that’s just too taboo, but I guess it also goes hand in hand with the prevailing sense that we cannot have any certainty about life after death.

Of course, this can quickly become a very personal issue. We’ve all lost loved ones, whether family or friends. And it’s even more personal than that. It’s the ultimate statistic: 1 out of every 1 of us will die. In that sense, you couldn’t find a conversation subject that is more relevant to each of us.

And perhaps the temptation for any religious faith trying to credibly make its way in the twenty-first century would be to tow the cultural party line here. Why not just offer some vague platitudes about the mystery of death?

After all, there’s countless phrases that trip off our tongues:

“Gone to the next room”.

“In a better place now”

“Living on in our spirits”

And yet this is where the Bible doesn’t stick to the script.

In a word: resurrection.

I guess when most of us hear that phrase, we instinctively think about Jesus. Resurrection is for Easter. Most people are familiar with the New Testament documents’ claim that Jesus of Nazareth came back to life, three days after being crucified on a Roman cross, around 33 AD.

So resurrection is something that Christians believe happened to Jesus, right?

The connecting image that the apostle Paul gives us is firstfruits:

But in fact Christ has been raised from the dead, the firstfruits of those who have fallen asleep. For as by a man came death, by a man has come also the resurrection of the dead. For as in Adam all die, so also in Christ shall all be made alive. But each in his own order: Christ the firstfruits, then at his coming those who belong to Christ.

The idea of first fruits isn’t rocket science (although, ok, I suppose you could say it’s agricultural science). Simply put, the first fruits are the sign that the rest of the crop is coming.

And if we’re in any doubt about that lingo – because, admittedly, the farmers amongst us are probably few and far between – then we could talk about movies instead.

As everyone knows, one of the best bits about going to the cinema is watching the trailers. I don’t know why on earth you’d fork out the best part of a tenner and then rock up late enough to miss them, but some people do.

Anyways. Jesus’ resurrection is like the trailer for what will happen in the movie of our lives. 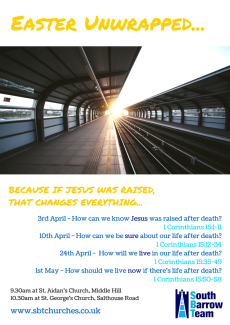 A life beyond the grave – physical, real, and yet imperishable. (If you want more details take a look at the rest of 1 Corinthians 15, as we’re doing at our churches in Barrow).

What happened to him will happen to those who are his. And it’s sure as the crop follows the first fruits. And as sure as the summer blockbuster follows the two-minute viral preview stuffed full with action and great lines and released a few months in advance.

But that’s not a connection we often make.

A recent survey of young adults in the UK suggested that just under half believed Jesus rose from the dead. Now, that actually seems quite high to me. But maybe that in itself betrays a disconnection. As the survey also identified, most people who affirmed a belief in the resurrection of Jesus didn’t think it bore any relevance to everyday life.

But for the apostle Paul, resurrection is everything:

If in Christ we have hope in this life only, [Christians] are of all people most to be pitied.

That’s a huge statement when you start to let it marinate for a bit. Paul’s expectation is that without this resurrection future the Christian’s life will just look pitiable. It won’t make sense.

Why so? Because Paul is living for his resurrection. A few verses later he phrases it like this:

…I die every day! What do I gain if, humanly speaking, I fought with beasts at Ephesus? If the dead are not raised, “Let us eat and drink, for tomorrow we die.”

Paul’s life is marked by sacrifice and service – so much so that he phrases it as ‘dying every day’. That might sound overly-dramatic, but actually it’s Christian discipleship 101, following Jesus’ own words.

But he’s doing that because resurrection awaits. If there was no resurrection, then you can bet your bottom dollar he wouldn’t have bothered with half of what he was doing. To put it another way, if life is just about now, then we may as well all sign up for getting what we can while we can.

But. But it’s not just about now.

Resurrection is coming. After all, we’ve seen the trailer.

And so that means that today I can choose to live against the grain of ‘get-what-you-can-while-you-can’.

I can choose to sacrifice, knowing that I’ve got nothing to lose.

I can choose to give generously with all that I am, because I know that I’m going to receive resurrection.

I can choose to labour for the gospel, knowing that in the Lord my labour is not in vain.

Dying every day because resurrection awaits.

Resurrection is for life, not just for Easter.

Why Resurrection is for Life, Not Just for Easter

Hello, my name is Robin. Welcome to That Happy Certainty, where I write and collate on Christianity, culture, and church-planting. I’m based in Barrow in South Cumbria, England, where my family & I are part of Grace Church Barrow.