Not Deciding: Leadership Lessons from Band of Brothers

I’m a real latecomer to the Band of Brothers party (admittedly, 13 years is pretty late!), but in this case I think better late than never. I’m finding HBO’s World War II mini-series is proving to be a great way for a father to bond with his three month old daughter when Mummy is out (bear in mind that at this stage good bonding is in part defined by its ability to send the little one to sleep).

I’ve just watched Episode 7, The Breaking Point. Easy Company (whom the whole series follows) are in the midst of defending their position in face of some pretty hefty German shelling and amidst some awful weather conditions. As they prepare to advance and regain the town of Foy in Belgium, the episode basically plays out as a powerful study on leadership, examining and questioning the actions of the Company’s commander, 1st Lt. Norman Dike.

At one point, 2nd Lt. Lipton makes this damning but perceptive assessment of Dike:

Dike is portrayed as being often absent from the presence of his men, getting the nickname ‘Foxhole Normal’ for hiding out in his bunker during most attacks. At a critical point in the attempt to take Foy, Dike freezes on the battlefield, unable to give orders, and his men are essentially left leaderless and completely exposed.

What happens is all the more powerful when you remember that the show is based upon on real events that near enough happened as they’re portrayed. Real people and real lives.

It’s an effective reminder to me that not making decisions is probably worse than making poor decisions. At least with the latter, you’re soon presented with the opportunity to learn from your mistakes. However, when one fails to decide, when one fails to act – whether that be in formal leadership capacities, or whether it be in our families and relationships – then we know the consequences can be critical. It’ll often leaves us directionless, drifting without growth or progress, and more so, it’s not difficult to see how it will probably effect others in the same regard: perhaps those whom we serve, perhaps our spouses and our children. 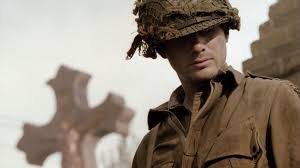 In this episode, Dike’s indecision is then sharply contrasted with the valiant Captain Ronald Spiers, the soldier who is sent into the Foy attack to replace Dike. Spiers is courageous: he is with his men and his men know what to do because he makes decisions and leads by example. The result at Foy is the stuff of military legend.

And it seems the Christian life is to be full of such decisive intentionality. We’re encouraged to be proactive in offering our bodies in living worship (Romans 12:1-3); we’re to set our minds and hearts on things above (Colossians 3:1-2); we’re to think upon that which is beautiful and true (Philippians 4:8).

I wonder if perhaps a good expression of intentionality is asking questions of ourselves: How am I doing spiritually? How is our marriage? How are we doing in seeking to share the gospel with those we love? Where are we going as a church?

5 Things Millenials Can Learn from their Elders

« Previous post
A Little Bit of Friday Fun: Gibberish in Perfect Accents
Next post »
A Voice from Across the Pond: Matt Chandler