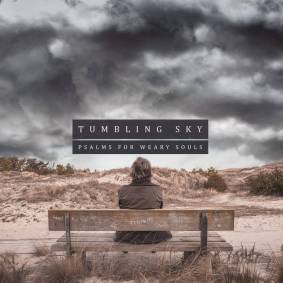 As soon as I heard Matt Searles’ first Psalms album, the acoustic Now and Not Yet, I loved it. The idea was simple: set the psalms to contemporary music – and yet it was so powerful to sing along to them. After all, God’s given us a song-book in the Bible, so why not use the wisdom and perspective the psalms give us to tune our own hearts? His follow-up record, From the River to the Ends of The Earth had a fuller sound but was just as excellent – if not better.

Now album number three, Tumbling Sky: Psalms for Weary Souls, has just been released – and my social media feeds have been full of high praise – not least because of the particular and often avoided topics that this record covers. Matt kindly took the time to answer a few questions about the significant purpose of the album – and I think any Christian will be encouraged by what he’s got to say…

Stay-tuned too for a chance to win one of three download versions of the album at the end of this interview.

Matt, tell us a little bit about yourself, how you got into song-writing  – and how being a church minister fits with that?!

I had the privilege of growing up in a Christian home, and I always played music but it was never more than a hobby for me, and I certainly never thought I’d end up writing and recording Christian songs! After a brief period as a French teacher I trained at theological college and worked as a church pastor for a number of years. Currently I work as Director of Training for the South Central Gospel Partnership, running ministry training courses for 25-30 churches in the local region. I very much see myself as a pastor first and foremost, and anything I do musically flows out of that. It’s probably not the norm these days for songs to be written by pastor (and average musician at best) but there’s something biblical about this model, and I’d love to encourage other pastors to at least think about writing songs, or lyrics (as Newton and Cowper did).

So, this is your third Psalms album. I know Tumbling Sky has a particularly significant story & heartbeat behind it – talk us through it.

Tumbling Sky has a very clear vision that the Lord laid on my heart over a number of years: to record an album of Psalm songs that would be an encouragement to believers walking through dark valleys, and might help them keep engaging with God in these times.

Much Christian music deals predominantly with the joys and the certainties of the Christian faith, but perhaps we’re less well served by songs that speak of brokenness, doubt and suffering. This hit home to me in recent years following a period of depression and ill health that meant for over a year I was unable to work. Also at this time friends of mine were experiencing bereavement, disability and depression, and as we journeyed together, wrestling and doubting, weeping and praying, we realised that in our own Christian lives and perhaps also in the wider church there wasn’t much room for, or language to deal with, brokenness or deep sorrow.

One particular sermon by John Piper struck home, that pointed to Paul’s words in 2 Corinthians 6: ‘sorrowful yet always rejoicing’. Often we feel we have to choose between sorrow and joy; it is one or the other. And therefore because Christ has come, because our sins are forgiven, because we’re going to heaven, we should rejoice, and we think there can’t be any place for sorrow in the Christian life. 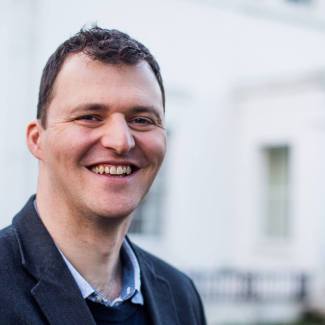 So Tumbling Sky was written out of a desire to give permission for tears, to remind us that sorrow isn’t a sign of spiritual failure, that brokenness isn’t a denial of the gospel. I pray that people will be encouraged by listening-in to the songs of king David and others, and might discover that the Christian life is not one of every question answered, nor is it without doubts, fears or struggles.

I also pray this album would be an encouragement to those who walk with those who are in dark valleys. I hope it will help us move beyond easy answers, that we might see sorrow and joy can coexist, as we weep with those who weep, as well as rejoicing with those who rejoice.

So, we know this is an album of songs each based on a Psalm. What’s been your song-writing process for this?

I wish I knew!!! As I’ve said, my theological and pastoral vision has been clear, and so I have always been trying to write songs that fit this vision. Personally, I’ve never found intentionally sitting down to ‘write a song’ has worked for me. Often I’ll just be meditating on scripture, and a line from the Psalm will inspire a melody to go with it. I try to have my phone with me most of the time, so I can capture these snippets – and I’ve got over 1000 of these recorded! Most aren’t worth bothering with, but occasionally I’ll listen back and think there’s something there to work on. Actually, many of my songs have been written on holiday because I find I’m often more creative when life is less busy. And very few are written at the piano or guitar – for me I find it easier to focus on the melody and the words without an instrument to hand.

One of the things I love about some of my favourite albums is the way that the record takes you on a journey – and the transition from one track to the next becomes familiar. Is there an order or logic to Tumbling Sky?

At every stage in the making of this album I’ve tried to rearticulate the goal to myself – to record an album that will help Christians walking through dark valleys engage with God our Father – and this then informs the ordering of songs as well. I wanted to begin with the brutal honesty of Psalm 143 ‘Lord hear my prayer!’ and Psalm 88 ‘Darkness my closest friend’. Then Psalm 13 ‘How Long O Lord’ marks the turning point on the album, as the psalm itself moves from doubt to trust. The middle section of the album has more upbeat songs of trust, but offset by songs like ‘Weeping is only for a night’ that remind us that this joy is a joy that coexists with sorrow. The penultimate tracks are more reflective – still psalms of trust, but also being very honest about life’s struggles. The last song is the most upbeat, as it is a psalm that celebrates the gospel, and points us to the future hope we have in Christ. I wanted the album to move (as the psalms do) from lament to praise, but not too quickly, nor in a completely linear way, as this isn’t how life works. 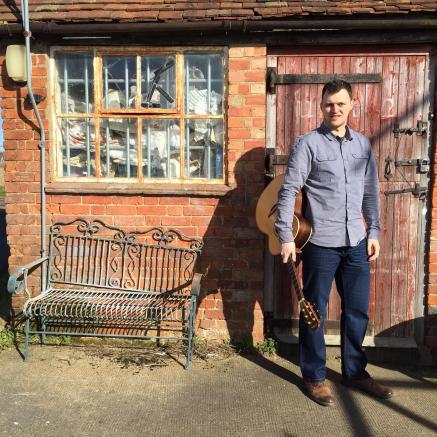 You’ve played around with different styles in your previous two albums. What would you say are Tumbling Sky‘s particular musical influences?

Again, the theological vision was primary here. In preparing for this album and whilst recording I’ve been asking the question: what musical styles best communicate sorrow, grief, and doubt? The prevalent styles in contemporary Christian music don’t always suit these themes, so I’ve drawn a lot on older British folk music (including using a number of tunes for songs on this album) as well as looking to blues and gospel music. The goal has always been to try to find musical styles that will best serve the words and the tone of the album – whilst still being familiar enough that many of these songs might be sung in churches.

It’s been a joy to hear some of the story and heart behind Tumbling Sky, as well as the some of the details involved in putting it together. Perhaps that’s persuaded some readers to give it a listen! What’s your hope and prayer for this album as people do just that?

As I’ve said above, my prayer is that this album would be an encouragement to believers walking through dark valleys, to help them keep engaging with God. We’ve kept this in mind at every step of the process (even doing a total re-record of one song, as I thought it wasn’t quite serving this goal). I’d much rather this album was precious to a few people who really need it, than generally popular with the many. If those who are struggling find it to be an album they want to keep turning to, and more than that, if in turning to this album they are helped to engage with our loving Father, than I think this project will have achieved its goal.

Give-Away! Matt’s kindly made it possible for three readers to win a download-version of Tumbling Sky! If you’d like the chance to win, all you have to do is leave any comment below – but why not tell us what your favourite psalm is – and why.

The Give-Away will close at midnight on Monday 20th June 2016. I’ll select three winners at random after that point and get in touch with you direct. Alternatively you can part with £8 right now and download Tumbling Sky: Psalms for Weary Souls directly here. The site also allows you to sample the album. CDs are currently in production and can be ordered as well.