I think it was those modern day Wordsworths, commonly known as 1D, who eloquently said:

So, what’s the story of your life? Story is a bit of a buzzword at the moment. Just watch most TED talks. “Just tell a story…” is often top of the list in terms of effective communication advice.

I suppose it’s unsurprising really. After all, we all love a good story, and we all have a story. Not only that but we all instinctively ‘tell’ a story. We might not think about it in such clearcut ‘where am I going?’, ‘where am I now?’, and ‘where am I from?’ categories, but sit us down and get us talking, and most of us would articulate some sense of history and some sense of hope or dream or concern for the future.

And these stories shape how we think about our place and purpose in the here and now. As the writer Trevin Wax has pointed out, “the story of your past and your vision for the future radically impacts your present.”

But not only do we have our own stories. We also have cultural stories.

Over the last few centuries these have perhaps been more tied to national or social class identity: This is who we are. This is where we came from. This is where we’re headed. Interestingly, there’s been a bit of suspicion towards the idea of ‘over-arching’ metanarratives (or, simply put, ‘big stories’) in recent decades. Post-modernism is infamous for telling us all ‘big stories’ are just powerplays and in reality there is no story. And yet, as is often pointed out, this is in itself a ‘big story’, begging the question why should we believe the ‘no-story’ more than any other? 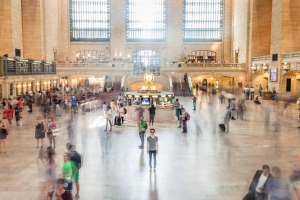 (By the way, if you want a stimulating introduction to some of our current cultural stories, I’d commend Trevin Wax’s talk from The Gospel Coalition’s National Conference, Discipleship in the Age of Richard Dawkins, Lady Gaga, and Amazon.com: Grounding Believers in the Scriptural Storyline that Counters Rival Eschatologies. Ok, it’s a long title, but it’s a brilliant introduction to the idea of ‘rival narratives’. He particularly explores how the values of the Enlightenment, Self-expression and Consumerism are not just ‘values’, but actually alternative ‘big stories’ of the world. And yet they’re often so subtle and engrained in our thinking, that we don’t question their ‘telling’ of reality.)

So where does all this leave Christians?

I’ve just spent a week with some friends digging into the apostle Paul’s letter to the Ephesians and one of the unavoidable things about the letter is how unashamed Paul is about telling his readers about God’s story. Or, to put it differently, the letter unpacks God’s plan.

Indeed, arguably ‘Ephesians’ is more of a ’round robin’ letter, rather than just being written for one specific church. In that sense it was probably Paul’s ‘standard’ discipleship resource that he sent out to young churches, which only further underlines the importance he placed on establishing Christians in God’s story.

And in a nutshell Paul is writing to persuade them that God is the ultimate story-teller, in that it is God who is directing history and the world according to his purposes. These purposes are underway, and so it makes absolute sense to align our personal stories with his big story. And at the heart of this big story – its past, present, and future, is Jesus Christ. You perhaps see this most succinctly put in Ephesians 1:10:

…a plan for the fullness of time, to unite all things in [Jesus Christ], things in heaven and things on earth.

Anyway, after a week chewing Ephesians over, here are 3 observations as to why knowing the Christian story matters:

Agree? Disagree? How do you think we should engage with the ‘story’ phenomenon?

If Tolkien & Lewis Opened a Coffee Shop in 2015, This Is Probably What They'd Have Playing

When did you last pray like this? (or How to Blow up your horizon with the apostle Paul…)