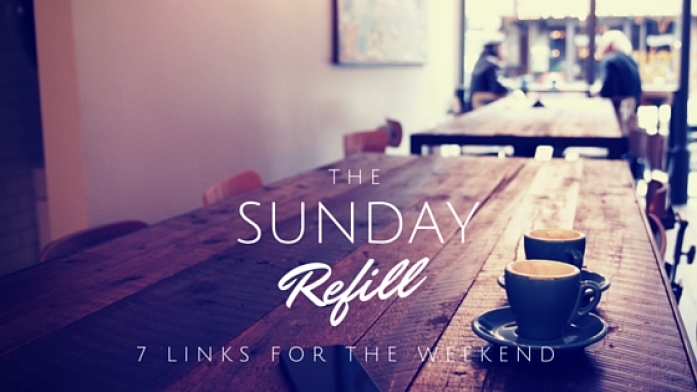 It’s bank holiday weekend, which is just as well because some of this week’s links are more long-form than Buzzfeed-esque. Naturally, they’re all worth the effort.

1) Bono & Eugene Peterson on The Psalms – You wouldn’t necessarily imagine that a rock-star having a chat with an 83-year old Bible translator would make for an engaging short film. And yet when Eugene Peterson, who crafted the popular paraphrase of the Bible, The Message, meets with the U2 frontman, it’s fascinating. Their subject is the Psalms, which have obviously had a big impact on U2’s music, not least because of their honesty – and Peterson’s insight and love of the Scripture is also a joy to behold. This piece follows up with some interesting data on the popularity of the psalms online.

2) Five Awkward Conversations Every Teen Needs to Have with Their Parents – 18-year-old Jaquelle Crowe, editor-in-chief of TheRebelution.com, reflects on five conversation topics that she’s glad her parents broke through the ‘awkward-barrier’ and initiated.

3) The modern crisis of identity by Glynn Harrison – This is a long piece, but it’s good – very good. So much of what we see going on in the culture(s) around us relates to the issue of identity – and who gets to decide where it comes from – so this is valuable reading.

4) Beautifully True – Check out this gripping video and mini-site. How can we know the Bible is true? For all the historical evidence, ultimately God opens our eyes to his unique beauty on the canvas of Scripture itself.

5) The Art of Imperious Ignorance – Do we sometimes use the line, “the Bible is unclear on this,” as an excuse or a power-tactic? Mike Ovey on top form: “Why should something that is, allegedly, subjectively unclear to me be judged by me as unclear for you too?”

6) Ten tips for leading church well – I find it so easy to get complacent about something like leading a church service. An older friend once told me that he thought leading a service well was actually a harder task than preaching well, even though the time that goes into prep is probably hugely stacked the other way. Here’s 10 nuggets of wisdom to make us think.

7) The Queen Says Boom – No doubt the chances are you’ll have already seen this video after it was tweeted by the Kensington Palace account on Friday morning. If you’ve just turned 90 and you’re the longest reigning British monarch, then why not let your grandson put together a 40 second viral video in which you say “boom,” to the POTUS & FLOTUS. From this we can also conclude that Prince Harry is probably harbouring worrying ambitions to be the next David Brent. I suppose if you know you’re not gonna get the crown, then it’s the next best thing, right? Watch and enjoy.

If you like the kind of content here, why not put your email address in the box on the top right and ensure you get this delivered first-class every weekend?

Good News People: A Six-Session Workbook Exploring How The Gospel Shapes Our Everyday

Hello, my name is Robin. Welcome to That Happy Certainty, where I write and collate on Christianity, culture, and church-planting. I’m based in Barrow-in-Furness in South Cumbria, England, where I serve a church family recently merged together from two existing churches, St Paul’s Church and Grace Church Barrow.

Why not order a bunch for your church to read through Advent together here.